Would you tell us what your response was to being shortlisted?

Super happy. Being ‘shortlisted’ already feels like a huge award. It’s been difficult to continue being productive during the pandemic, so being part of the residency is amazing. Like many artists, I depend on commissions to make new and challenging work, so the fact that it’s both an award and a very supportive residency is encouraging.

May we ask you to tell us a little more about your “expanding cinematic universe?

I For the last five years, I’ve been making a series of games, installations, and films that are all part of the same fictional world, which deal with the cultural impact of technology in East Asia. It’s like a science fiction universe, where different stories are linked together. Of course, the idea of a ‘cinematic universe’ is drawn from popular media, from mainstream movie franchises or endless ‘sequels’ in video games. Part of the difficulty of being a media artist is that many projects are very short-term, and it’s hard for projects to have an afterlife beyond an exhibition or event. So for me, having a continuous narrative is very important because it helps me build longer-term and more ambitious projects – a kind of personal worldbuilding.

Would you tell us about your interest in “the impact of the virtual on our perception of reality?”

There’s always been a link between images and illusion, even from ‘Plato’s cave.’ Today, so many of the images that we see today are computer-generated images rather than photographs of real things. In computer games, there’s a direct link between ‘virtual’ and ‘reality.’ I used to study architecture, a field where the idea of ‘representation’ is very important. For example, most of the ‘work’ in architecture is about drawing buildings, rather than constructing them with your own hands. There is also a very important political angle about how labour is divided between ‘knowledge work’ and ‘manual work’. When I was a student, new digital 3D tools were overtaking the use of traditional hand drawing, and many practitioners were skeptical about digital technologies. However, I thought that these virtual tools can enable contemporary artists to create environments that can reflect some of the utopian ideas of architecture. Except these virtual spaces would not be limited by the same financial or political considerations that make a lot of real-life architecture a form of property development. I really enjoy the freedom in that.

Would you share with us your point of view on the “geopolitical implications of AI to bridge between popular culture and critical discussions on technology?”

TComputer-generated images are an obvious example of how technology has impacted how we perceive real spaces. We see renderings of cities and buildings before they are actually built, for example. But artificial intelligence is a huge topic that isn’t just about how things appear. What’s so different about AI is about how human-made things can think for themselves, and how they can have their own agency. Another interesting thing about AI is how popular culture has influenced the discussion, especially science fiction films and literature. That’s why I think the link between AI and art is so interesting. The reason I say it has ‘geopolitical’ implications is that AI depends on data, and different countries have different attitudes towards capturing data – from surveillance in cities to biometric data from healthcare. These differing attitudes, and the biases that are embedded within AI algorithms themselves, will come to impact how society is controlled in future. This isn’t an imaginary dystopian situation, but is already very much in place, especially in online systems and in urban management systems all around the world. 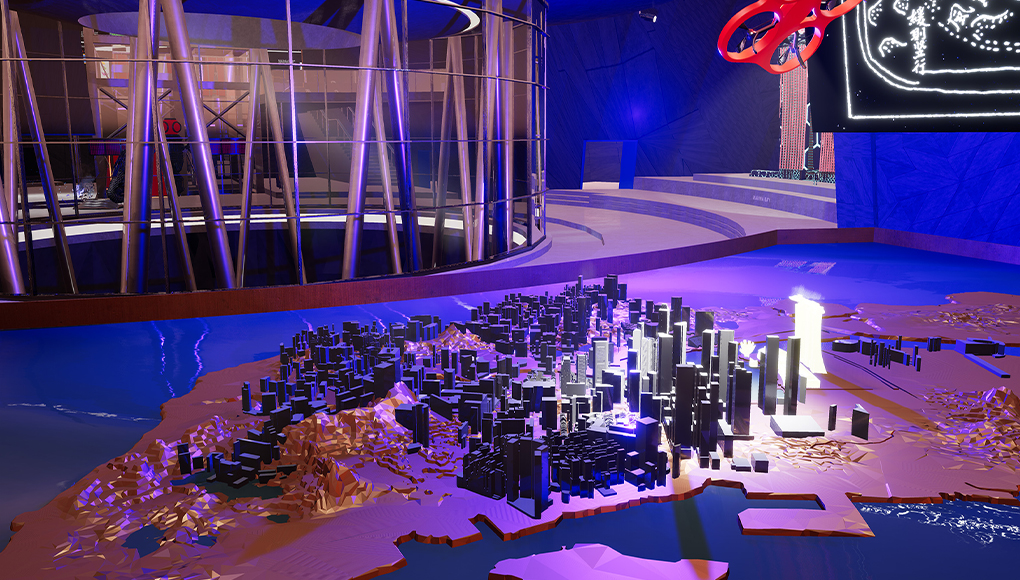 Lawrence Lek 陆明龙 (b. 1982, Frankfurt) is a London-based multimedia artist who unifies diverse practices into a continuously expanding cinematic universe. His works include Sinofuturism (1839-2046 AD) (2016), Geomancer (2017), 2065 (2018) and Nøtel, in collaboration with electronic musician Kode9 (2019). His debut feature film AIDOL was selected for Moscow International Experimental Film Festival, International Film Festival Rotterdam and at transmediale 2020 festival at Volksbühne, Berlin. Lek composes soundtracks and conducts audio-visual mixes of his films, often incorporating live playthroughs of his open-world video games. Soundtrack releases include Temple OST (The Vinyl Factory, 2020) and AIDOL OST (Hyperdub, 2020). Performances include Doom at Somerset House, London (curated by Christian Marclay) and ProGeo, ICA, London. He received his B.A. from Trinity College, University of Cambridge in 2004 and earned his AA Diploma from the Architectural Association, London in 2008. He holds a Master of Architecture II from the Cooper Union, New York, NY and is a PhD candidate in Machine Learning for Film at the Royal College of Art, London.